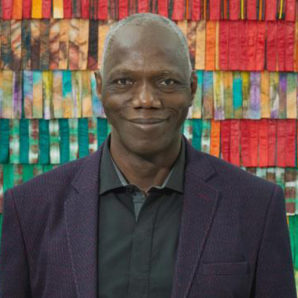 Abdoulaye Konaté was born in Mali in 1953
Medium: Textiles

Materials: Woven and dyed clothes from his native Mali

On the space between figuration and abstraction: “The visual difference for me is relatively low. Up to a certain level, the imagining of the figurative finds himself in abstraction. Just think of looking at a cloudy sky, in which inevitably also repeatedly shapes, silhouettes seem reminiscent of people. For me, reconstructed in any case even in the most abstract forms the idea of ​​something representational. The border is not as clean as one likes to believe.”

On his use of textiles: “Textiles are in principle very strongly tied to the people, on whose body they act for him often as a house. And the meaning varies according to the ethnic groups, epochs, traditions. There are certain substances that are intended for the wedding, soirées or religious ceremonies. To that extent have textiles for human social and periodic content, sometimes there is also a mystic attribution. With us, the musicians and hunters carry certain substances, because they believe that some force inherent in these and they are protected.”