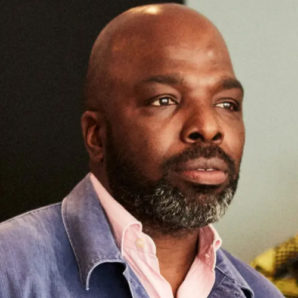 Duro Olowu is a Nigerian-born, London-based fashion designer. He is best known for his innovative combinations of patterns and textiles that draw inspiration from his international background. His empire waist patchwork “Duro” dress was named “dress of the year” by both American and British Vogue in 2005. Some of Olowu’s notable clients include Michelle Obama, Solange Knowles, and Iris Apfel. In 2005 he won “New Designer of the Year” at the British Fashion awards, the first designer to win without ever showing a runway presentation.

Olowu was born in Lagos, Nigeria, to a Nigerian father and Jamaican mother. He grew up living in both Nigeria and London and spent summers in Geneva, immersing him in multiple cultures. Olowu began sketching fashion designs at six years old and continued throughout his childhood, but still chose to pursue a career in law and follow in his father’s footsteps. He moved to the United Kingdom for school, earning a law degree at the University of Kent, and practicing in Nigeria. He married Thelma Golden, Director and Chief Curator of The Studio Museum in Harlem, in 2008. In 2004, Olowu launched a women’s wear label under his own name, beginning with the Spring/Summer 2005 collection. A high-waisted patchwork skirt from that collection, later dubbed the “Duro,” developed a cult following after being discovered and publicized by American Vogue editor Sally Singer and Julie Gilhart of Barneys New York, leading to it being hailed the dress of the year by both British and American Vogue. In 2005, he was named London Fashion Week’s New Designer of the Year, the only designer to do so without having a catwalk show. In 2009, he was named the Best International Designer by the African Fashion Awards and received one of six nominations for the Swiss Textile Federation’s coveted prize of €100,000. In October 2012, Olowu announced a partnership with J. C. Penney. Under the label “Duro Olowu for jcp,” consumers could purchase clothing, accessories, and paper and home goods with his signature bold prints. Duro Olowu has enjoyed support from American First Lady Michelle Obama, who frequently wears his designs. “Michelle Obama was a real supporter and I felt very honoured because she wore very few non-American designers” Olowu said in an interview. Michelle Obama also engaged Olowu in decorating the White House for Christmas 2015, where he decorated the Vermeil Room with ornate trappings and teddy bears made of vintage African fabrics.