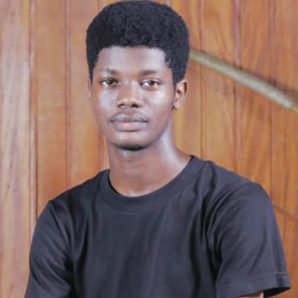 O’Plérou Grebet is 22. He is a Graphic Designer, Digital Artist and founder of Zouzoukwa, a Creative Tech company of the Ivory Coast. Quiet, creative and impactful are pretty much the words that sum up O’Plérou Grebet, the Ivorian graphic designer on a mission to promote African cultures in modern and interactive ways.

He is the founder and creator of Zouzoukwa, an Android and iOS app which allows thousands of African people to communicate more clearly using stickers and emojis representing African culture. He has created 365 free emojis that portray contemporary African life. These include three-legged pots, djembe drums, women dressed in ankaras, tuk-tuk vehicles, African masks, hair braids and shekere, a West African percussion instrument made with a dried gourd; all this self-taught watching YouTube videos. After mastering the skill, he would post his creations on Instagram which soon gained momentum. Using art, culture and technology, Grebet is sharing West African heritage to the world. He has since featured in numerous publications, locally, and internationally, including the New York Times, CNN, NPR and Fast Company. The app has been downloaded more than 100,000 times in less than a year. “I am aware of the impact of social media, and I use it to allow people to embrace their culture through it. The most popular filter I made is Selflove 225, which adds a rotating text above the head of the user saying ‘ye dja’, which means ‘I slay’ in Ivorian slang,” Grebet tells FOBRES AFRICA.

The African Talents Awards named Zouzoukwa the best app of 2019. Currently, the Ivorian has been using tech to create Instagram Augmented Reality filters. “I hope to be one of the 2020 FORBES AFRICA 30 Under 30 to inspire the African youth, and show that what we create has real impact. I also make connections with other Africans transforming our continent and see how we could work together,” the quiet creative says.