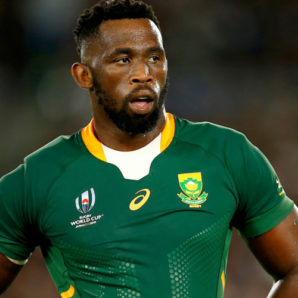 Siyamthanda Kolisi (born 16 June 1991) is a South African professional rugby union player who currently captains the South Africa national team and also plays club rugby for the Stormers in Super Rugby and Western Province in the Currie Cup. He generally plays as a flanker. In 2018, Kolisi was appointed captain of the Springboks, becoming the first black man to hold the position, and eventually leading the South African Rugby team to victory in the 2019 Rugby World Cup Final against England. In December 2019, Kolisi was named in New African magazine’s list of 100 Most Influential Africans.

Kolisi was a member of the South Africa under 20 side that competed in both the 2010 and 2011 IRB Junior World Championships.

He made his national team debut as Springbok on 15 June 2013 against Scotland at the Mbombela Stadium in Nelspruit. He replaced the injured Arno Botha in the 5th minute and was named as Man of the Match as South Africa won 30–17. Nine further substitute appearances followed during the 2013 international season as he firmly established himself as a regular member of the national squad. Kolisi also played two matches in the 2015 Rugby World Cup playing for South Africa against Japan and Samoa.

Kolisi captained the South African team at the 2019 Rugby World Cup in Yokohama, Japan, defeating England 32–12 in the final to lift the Webb Ellis Cup. This was South Africa’s third World Cup win, tying with New Zealand. Siya Kolisi become the first black captain of a World Cup-winning side.