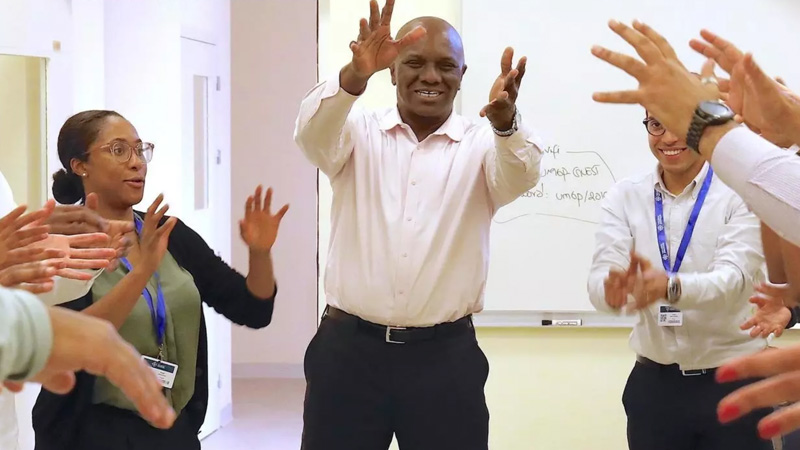 Image: Ade Mabogunje in training session in 2018 in Marrakech, Morocco, during the Atlantic Dialogues conference. © Policy Center for the New South (PCNS)

Chief mechanical engineer at Stanford University, this expert in design thinking teaches the virtues of Ubuntu, African humanism, in Silicon Valley. For African entrepreneurs, he advises to get to know finance and ‘think big.’

” Don’t call me Professor! As I do research, I reserve the right to be wrong 99% of the time…  ” Ade Mabogunje , positive and modest, readily describes himself as an “ant.’ He has nonetheless, one of the most perceptive minds you could ever meet. Trained at the University of Lagos in 1984, he completed his mechanical engineering course at Stanford, from which he graduated with a Doctorate in 1997, before becoming a lay person there. He has worked in Africa, India and Europe, among others for the French oil group Elf and Artificial Intelligence experts at the prestigious NASA Ames Research Center in California. Former Associate Director of the Stanford Center for Design Research (CDR), he has run all kinds of programs and is now in demand around the world for training sessions.

His passion: Innovation. In addition to being an individual genius, Ade Mabogunje strongly believes in team spirit and speaks readily of this feeling of collective belonging which is the hallmark of the African continent. The famous “ubuntu”, a Bantu word often cited by the South African archbishop Desmond Tutu, is thus used in the famous saying: “Man is only a man through other men.’

Ubuntu is not a panacea

Ade Mabogunje says , “You treat foreigners and members of your community with sincere warmth. Ubuntu comes from small hunting communities whose members had to care for each other for the sake of survival. Ubuntu always comes with the birthright, and respect of seniors.  ”

For Ade Mabogunje, this is a breeding ground for innovative ideas, but not a panacea. He explains it in conferences he gives in Silicon Valley, to oppose this system of values ​​to that of industrial capitalism, known as “Plantation”. As the name suggests between the lines, this system is linked to the era of the industrial revolution, the transatlantic slave trade and the colonial empires. “ In the plantation, everything is done to make the boss happy. Work first represents a status and wages a favor. The loyalties are concentrated on the person of the chief. ”

Problem: If you are managing a community that suddenly goes from 1 to 4  million people, chances are that as a boss, you’ll have a hard time grasping even that size. More and more, people are coming to the conclusion that we work better as a team. Japan had no plans to beat the United States in auto manufacturing. If they produced better, effective cars, and it is because they worked better collectively’.

Examine the origins of finance and dream big

In Africa, the Stanford professor is impressed with the innovation that has manifested itself in the arts over the past decades – which includes fashion, music, film and food. “ The general adoption of information technology has been remarkable and shows a certain level of flexibility in adaptation, ” he continues. But when asked what the main obstacle to innovation is on the continent, his response is very clear and direct. The first big failures he identifies is linked to the “lack of imagination in finance. Key financial institutions are allowed to borrow five to seven times the amount of their deposits. This margin is often not used to develop the capacities of others. It is a huge failure.  ”

Second obstacle: that laws are not adapted to the social norms at play, which poses all the more problem as the societies which are heterogeneous and carry several systems of values. Then, the stock exchanges seem to him too underdeveloped to allow local entrepreneurs to raise funds. There are too few systems for gathering information and data in the field of business. Finally, the focus should be on human capital at all levels – health, education, sport, entertainment, media, – because the creation of wealth depends on these.

“ My advice: have friends in finance and be aware of the structure of financial systems. Tell yourself that you are the most important you! If you produce coffee like Kenya, why don’t you own Starbucks, why don’t you control the whole chain and make the profit from it?

His favorite books include Les Mythes Du Management  (Myths of Management) (1999) by James G. March, as well as ‘Money’: Vintage Minis by Yuval Noah Harari, Mind in Motion: How Action Shapes Thought by Barbara Tversky and The Achievement Habit: Stop Wishing Start Doing, and Take Command of your Life by Bernard Roth. His favorite films are documentaries on the question of finances and success are ‘Panic’: The Untold Story of the 2008 Financial Crisis (2018), Personal Gold: An Underdog Story (2015), which traces the struggle of four American women who quit, and Something Ventured: Risk, Reward and the Original Venture Capitalists (2011).

Among his favorite readings, he also quotes two of his friends, Victor Hwang and Greg Horowitt, American authors of an essay published in 2012 on the model of the “tropical forest” (The Rainforest: The Secret to Building the Next Sillicon Valley) The model that allowed the emergence of Silicon Valley, a crucible of high-tech innovation in California. “A mix between Ubuntu, which gives human warmth but not necessarily efficiency, and Plantation, which gives efficiency with a value system centered on the chef. The “tropical forest”is about breaking the rules and dreaming, opening the doors and listening, trusting, seeking fair treatment and not benefits, experimenting together, failing and persisting. This model is best for innovation because it allows you to be in tune with earthly energies to create. “Utopian? Not really, since it been happening in the United States from the 1960s.

Ade Mabogunje brings an African touch to the thinking around innovation in California and is focussed on bringing the lessons of the Californian experience to the continent, through training.