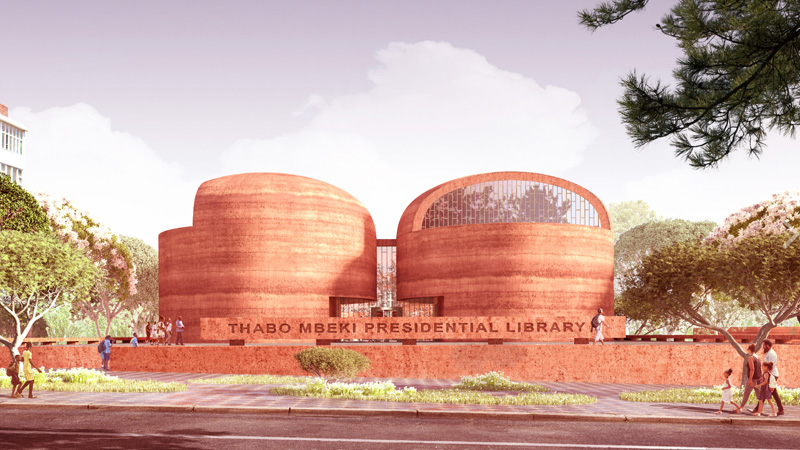 Johannesburg, South Africa. Adjaye Associates, the eponymous practice of RIBA Gold Medal-winning Ghanaian–British architect Sir David Adjaye, has unveiled its design for the Thabo Mbeki Presidential Library, a rammed earth structure with granary influences set to include a museum, research center, and more in honor of the second post-apartheid President of South Africa. Born in 1942, Thabo Mbeki served as president from 1999 until his resignation in September 2008, nine months before the conclusion of his second term. Described by the firm, which maintains offices in New York City, London, and the Ghanaian capital of Accra, as “a space of excellence, learning, research, discourse and cultural exchange predicated on the African perspective,” the presidential library is planned for Riviera, a suburb of Johannesburg. Flanked by a public plaza, the interconnected cylindrical forms—eight in total—that top the long, tilted base of the building are meant to evoke grain storage structures in a metaphorical nod to the library’s function as a place to seek “knowledge-based nourishment.”

Spread out across just over 52,000 square feet, the library will serve up quite the feast. In addition to the aforementioned museum and research center, the facility will also house an exhibition space, a women’s empowerment center, auditorium, cafe, seminar facilities, administrative offices, “digital experience space,” reading rooms, and an archival hub that will hold artifacts and key documents of Mbeki as well as other significant African historical figures. “Providing infrastructure for the preservation and distribution of African history and knowledge, the library will become a new anchor point and campus for local and international scholars,” explained the firm in its project narrative. The program will be dispersed throughout the lower level of the library and the eight cylindrical structures that rest squarely atop it. Renderings depict the library’s main reading room and research center, for example, as being located in two of the granary-inspired domed forms. Each dome features an aperture—all a different shape, size, and orientation—that will create a controlled natural light source for each individual chamber. A photovoltaic panel-topped interstitial space—a nucleus of sorts or “indoor den” per Adjaye Associates—will run the length of the eight-barreled structure and connect each of the domed chambers. This area will be accessible via a grand interior staircase (also situated in one of the cylindrical forms) leading up from the lower level to the ground-level plaza, which can be accessed via steps on the high end of the sloping base structure and a ramp at its low end.

In addition to the compressed mud that will comprise the facade of the Library, both the wood cladding and stone used in the terrazzo flooring will also be locally sourced in an effort to reduce the building’s overall carbon footprint. The aforementioned rooftop solar panels, geothermal heating system, and the high thermal mass of rammed earth, which absorbs heat during the day and release it at night, will help passively regulate the building’s temperature while reducing its dependence on mechanical cooling and heating.

Hotels of Africa, Lodges and Safaris