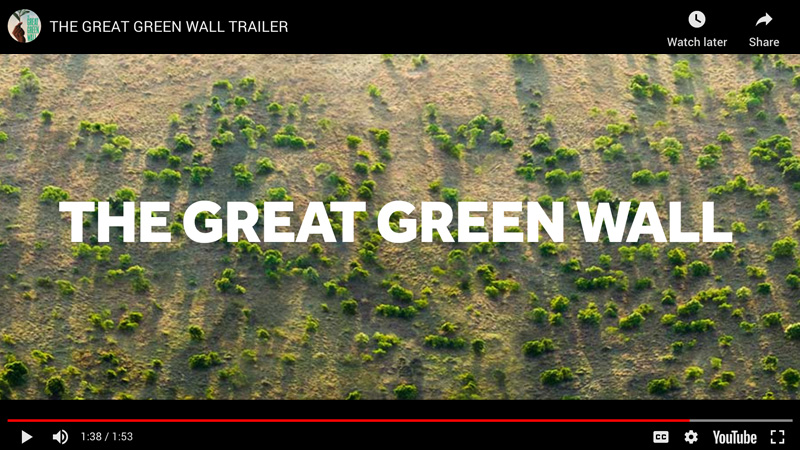 The Great Green Wall’ is a movement with an epic ambition to grow an 8000km natural wonder of the world across the entire width of Africa by planting trees. It is a collaborative effort of 20 countries that transcends geographical, political, and cultural divides by uniting people across borders. Once complete, it will be the largest living structure on the planet. By 2030, the Wall aims to restore 100 million hectares of currently degraded land and isolate 250 million tonnes of carbon helping in overcoming humanity’s biggest threat – our rapidly degrading environment.

The Great Green Wall is an African-led movement with an epic ambition to grow an 8,000km natural wonder of the world across the entire width of Africa. A decade in and roughly 15% underway, the initiative is already bringing life back to Africa’s degraded landscapes at an unprecedented scale, providing food security, jobs and a reason to stay for the millions who live along its path. The Wall promises to be a compelling solution to the many urgent threats not only facing the African Continent, but the global community as a whole – notably climate change, drought, famine, conflict and migration. Once complete, the Great Green Wall will be the largest living structure on the planet, 3 times the size of the Great Barrier Reef.

The Great Green Wall is taking root in Africa’s Sahel region, at the southern edge of the Sahara desert – one of the poorest places on the planet. More than anywhere else on Earth, the Sahel is on the frontline of climate change and millions of locals are already facing its devastating impact. Persistent droughts, lack of food, conflicts over dwindling natural resources, and mass migration to Europe are just some of the many consequences. Yet, communities from Senegal in the West to Djibouti in the East are fighting back. Since the birth of the initiative in 2007, life has started coming back to the land, bringing improved food security, jobs and stability to people’s lives.

The Great Green Wall isn’t just for the Sahel. It is a global symbol for humanity overcoming its biggest threat – our rapidly degrading environment. It shows that if we can work with nature, even in challenging places like the Sahel, we can overcome adversity, and build a better world for generations to come.