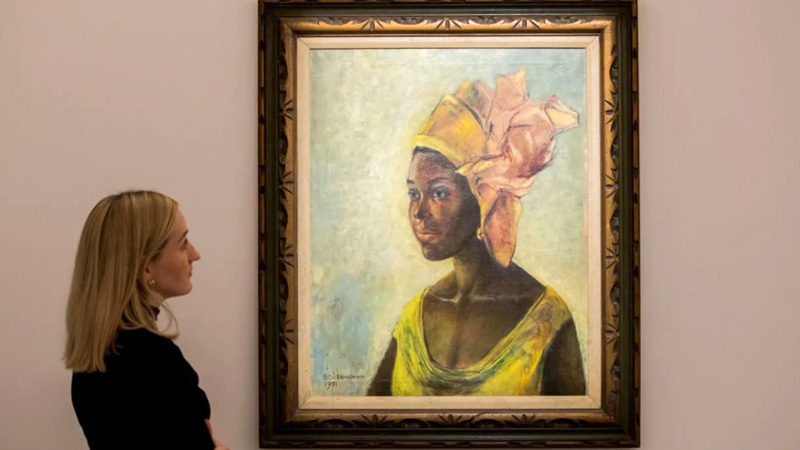 The subject of the painting, Christine, was born in New York but moved to Ghana in her late 20s to live with her step-father. She then moved to Lagos in 1969 where she struck up a friendship with the artist. Enwonwu was a student at Goldsmiths, Ruskin College, and the Slade art school in the UK in the 1940s. The owner of the painting Googled the signature on the artwork and only then realized its enormous value.

The late Nigerian artist Ben Enwonwu is considered the “Father of African Modernism”. His 1974 painting of the Ife princess, Adetutu “Tutu” Ademiluyi, was dubbed the “African Mona Lisa” by veteran Nigerian author Ben Okri. The painting of the the young royal of Ife, an ancient Yoruba city in the south-western region of Nigeria, was discovered last year in a London flat after having disappeared for close to four decades. The artwork was then sold a few weeks later for a record-breaking USD 1.6 million More recently, his 1971 painting entitled “Christine”, was auctioned off in London after the family who owed it Googled the signature on the painting and realized its enormous value.

There are many people with artworks and antiques in their homes but often have no idea that they’re incredibly valuable items. According to News24, this was the case with a family who went on to have the painting sold at a London auction for £1.1 million (approximately USD 1.4 million)—seven times the painting’s pre-auction estimate.

After the Biafran war, Enwonwu’s artworks became symbols of peace in a country where ethnic tensions had worsened. Back in 1967, the Republic of Biafra was comprised of the southern states in Nigeria with a predominant population of the Igbo people. The war had started after Biafra sought to obtain independence from the rest of Nigeria although they were ultimately defeated.