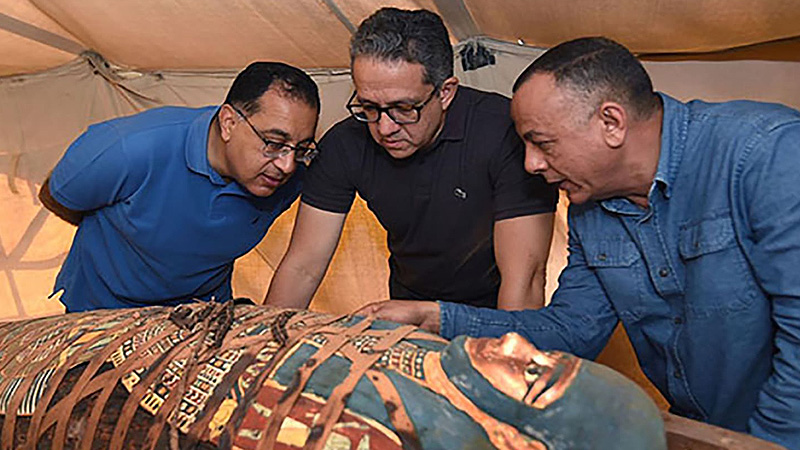 Best described as a vast necropolis, the announcement marks the latest in a string of discoveries at Saqqara, a necropolis about 20 miles south of Cairo. The vast burial ground once served the royal capital of Memphis, and the site is also home to Egypt’s oldest surviving pyramid.  In September, archaeologists at Saqqara discovered almost 30 closed coffins in one of three burial shafts measuring 10 to 12 meters (33 to 39 feet) deep. At a press conference earlier this month, the ministry said the discovery brought the total number found inside the tombs to 59.

Archaeologists in Egypt have discovered another large cache of unopened sarcophagi in Saqqara, adding to the trove of almost 60 coffins recently recovered from the ancient necropolis. Although full details are yet to be announced, authorities said in a statement that “a huge number” of wooden sarcophagi had been unearthed. The country’s Tourism and Antiquities Minister Khaled El-Enany said on Instagram that the find amounted to “dozens” of coffins, adding that they have been “sealed since ancient times.”

The collection of sarcophagi, stored in three newly discovered burial shafts, is believed to date back more than 2,500 years. Colored and gilded statues were also found in the tombs, a government press release said. On Monday, El-Enany and Egyptian Prime Minister Mostafa Madbouly visited the site alongside secretary general of the Supreme Council of Antiquities, Mustafa Waziri. Photos released by the Ministry of Tourism and Antiquities show the trio being lowered into a shaft before inspecting painted coffins and a variety of other objects.