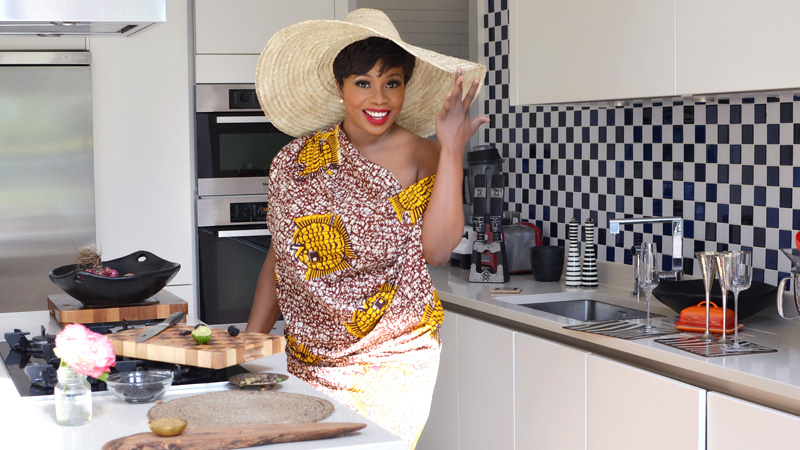 Chef Fafa Gilbert specialises in fusion African cuisine, where she mixes both African, Asian and Western ingredients together to create her own recipes. Fafa is from the Volta part of Ghana and a town which shares a border with Togo. Fafa spent most her free time in the kitchen with her Mum and learnt the traditional way of cooking in Ghana and Togo. The traditional methods included but to mention a few, char grilling tomatoes to make stews, grinding spices in an earthen ridged pot with a wooden pestle and grinding chillies on a stone slab.

Fafa enjoyed watching her Mum enhance the natural flavours of ingredients by adding spices at the right time, the importance of cooking at the right temperature and food presentation. Fafa fondly talks about visiting the food market at dawn with her Mum (the perfect time to get fresh produce) , watch her Mum carefully select the best of ingredients through smell, touch and the importance of building great relationships with farmers. Fafa comes from a family of foodies and restaurateurs which has inspired her style of cooking including spending time with her Grandma in Togo (which shares a border with Ghana). Fafa learnt how the same ingredients were cooked and tasted differently in both countries,(Togo has the French influence in their cooking methods).

A favourite memory of her Grandma was the freshly caught Char grilled fish, smoky spicy Tomato salsa with salad and baguettes accompanied with her tales of wisdom, which encapsulates Fafa’s methods of cooking. Fafa spent 2 years with a Lebanese and Ghanaian (from a different tribe) family which again exposed her to some Middle Eastern dishes with her favourite being the Za’atar bread. In 2000, Fafa moved to the UK, worked in Marketing, as an Insurance broker and currently as an Internal Auditor for an insurance brokerage. Fafa also trained as an Interior Architecture and a lover of the Arts, which reflects in her home. However it was meeting her husband that influenced her to start ‘Ndudu by Fafa’. A food blog and vlog about creative African cooking.

‘Ndudu’ means food in Fafa’s African dialect called ‘Ewe’, (from the Volta region of Ghana), where she embodies the term ‘a twist upon a twist’ with her Food blog, YouTube page and second series of her popular cookery show ‘Ndudu by Fafa’ on ABNTV in the UK. Fafa started incorporating her husbands English heritage of ingredients to her classic West African cuisines and has carved a niche for her recipes which has earned her the title of the most influential African Foodie for 2016.

Fafa has been featured on BBC Africa talking about her fusion recipes, as a guest Chef on ITV, This Morning and CNN Africa, sharing her flavoursome dishes. Fafa has featured and written for a few magazines (Vital Woman, Mambo Magazines, Okay Magazine, Radiant Health, Afro cooking Magazine etc) about her recipes and hosted various events including one at the SouthBank centre and Facebook headquarters.