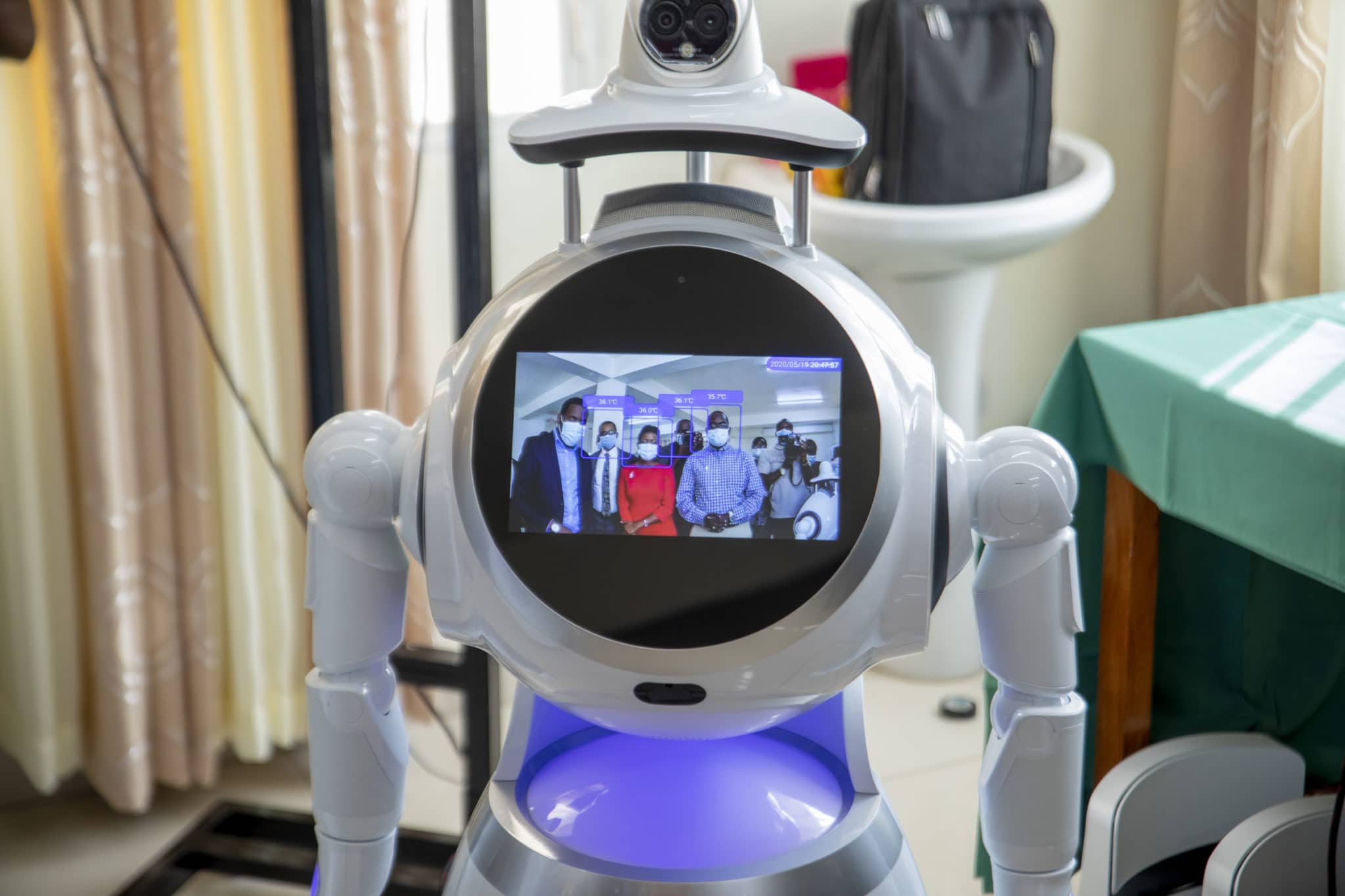 The new wave of innovations on the continent has seen governments, universities, corporates and small business rally together to come up with rejigged solutions and find effective ways to combat the crisis. In Rwanda, the ‘land of a thousand hills’ known for its tech startups and encouragement of new enterprise, a raft of new ideas are emerging, from clever face masks to ventilator machines, and food delivery apps to contact tracing apps and robots.

We examine a few: 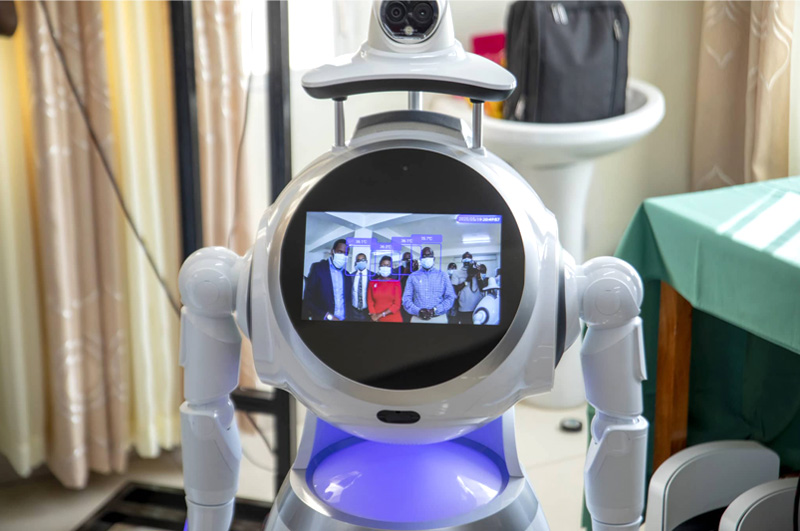 In an age of social distancing, robots are now increasingly being used as frontline health workers in hospitals across the globe. A study published in Science Robotics states: “Robots have the potential to be deployed for disinfection, delivering medications and food, measuring vital signs, and assisting border controls. As epidemics escalate, the potential roles of robotics are becoming increasingly clear.

In partnership with the United Nations Development Programme, the Rwandan government acquired and deployed five smart anti-epidemic robots for use in two Covid-19 treatment centers and at the Kigali International Airport.

The blue-eyed robots, acquired through ZoraBots Africa Ltd, have Rwandan names such as Ikizere (hope), Ingabo (shield), Urumuri (light) and Akazuba (sun) that depict the country’s spirit and values. The mobile robots also feature functions such as facial recognition, temperature screening, the ability to monitor patient status as well as save medical records.

According to Benjamin Karenzi, CEO of Zorabots Africa, the information collected by the robots can be used to inform policy-makers in case of future pandemics. “The robots are able to capture and store all manner of data and this data can be used by decision-makers even in the future in case such a crisis reoccurs,” Karenzi said during an interview with CNBC Africa. The pandemic has surely brought forth the crucial role of robotic technology and its power to safeguard and improve human lives. The fourth industrial revolution is surely here. 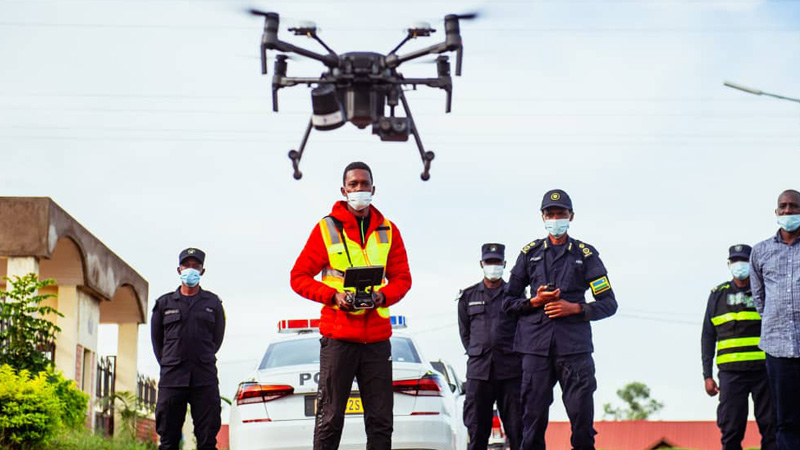 With 30 employees and operating in six different countries in Africa, Eric Rutayisire’s drone company, Charis UAS, has worked on a number of projects in Rwanda, including spraying pesticides using drones on sites to quell mosquito breeding and malaria. However, some of these projects came to a screeching halt when Covid-19 struck.

“Certain projects that were meant to kick off had to be stopped and we lost some revenue,” Rutayisire tells FORBES AFRICA. The CEO says that he and his team had to quickly come up with an innovative way of joining the fight against the pandemic. They saw an opportunity to improve communication systems during the country’s total lockdown period. “We identified gaps in the way information regarding the disease and the restriction guidelines was being passed to the community. The police would drive around in vehicles with loudspeakers communicating to people. So we approached them with the idea of using drones,” Rutayisire says.

The police quickly bought into the idea seeing as it would help limit human contact whilst also reach more people. For this, the drones had to be slightly modified. “We fitted the drones with megaphones and built a communication system that linked them to the police walkie-talkies, enabling them to broadcast messages from wherever they were.” Three to four drones would be dispatched daily to various far-flung districts in Rwanda, with each drone operated by a team of two people.

Did the company make any profit for this new venture? “Our goal was not to make profits but to support the Rwandan government in the fight against this pandemic. Our company got increased visibility, but that was not our main goal,” says Rutayisire. The use of drone technology in the fight against the coronavirus is not unique to Rwanda. Countries such as China used drones for crowd control whilst Australia developed a ‘pandemic drone’ to remotely detect and monitor individuals with infectious respiratory conditions.

Never before has a commodity risen from ‘obscurity’ to becoming one of the world’s most coveted items of clothing. Face masks have instantly gone from exception to norm, and is the facial armor in the fight against Covid-19.

When the first case of Covid-19 was reported in Rwanda and it became apparent that masks would be essential in curtailing the spread, local garment manufacturing companies, and even neighborhood tailors, rose to the occasion to produce an array of masks to meet the rising demand. Fabrication Laboratory, commonly known as FabLab Rwanda, which helps young innovators in the country turn their ideas into products, specifically in the hardware and electronics domain, saw an opportunity to produce a different kind of personal protective equipment – face shields. According to FabLab’s General Manager, Danny Bizimana, his team decided to take a route that no one else in the country had taken before. “There were too many textile companies in the country producing the face masks, so we decided to do the face shields because we knew that Rwanda ships them from China and they would soon be in short supply,” Bizimana explains. Luckily for FabLab, the materials to manufacture the face shields are locally available.

We chose simple, locally-available material to ensure that the production of the face shields can be sustained even through long periods of border closures.”  The company has been producing 500 face shields per day but with the re-opening of the economy, this number has risen. “Our main clients were doctors, surgeons and dentists. However, now that the hospitality industry is operational, we are now supplying the face shields to hotels and have increased our production capacity to 700 units per day,” Bizimana says.

FabLab initially produced the face shield as its contribution to the national fight against the pandemic, but as demand for the product has been steadily growing, the company is now making profit. The mask economy is here to stay, with a study from Stanford University indicating that they are a crucial step in reopening the economy and can help ensure public safety in a post-Covid world. 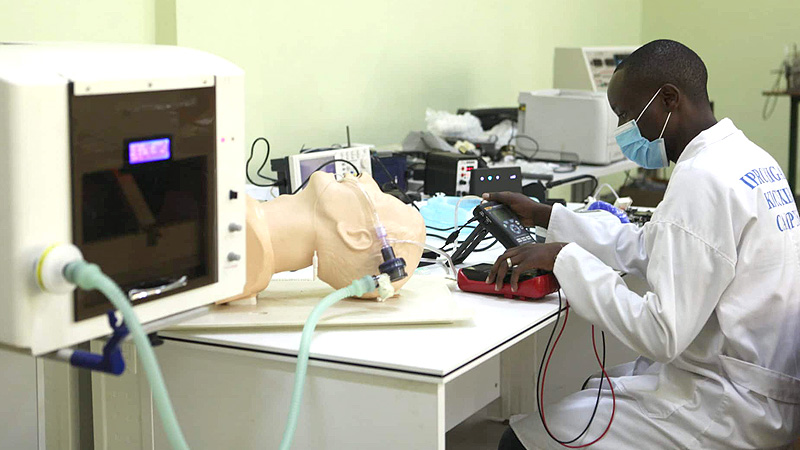 With the Covid-19 pandemic causing an unimaginable strain on health systems, one particular medical equipment has been in short supply – the ventilator machine. The machine helps critically-ill patients who cannot breathe on their own, and is literally the difference between life and death for Covid-19 patients with acute respiratory complications. So dire was the shortage that in Italy, which was Europe’s center of the Covid-19 outbreak, doctors were forced to make the difficult decision about who uses the ventilator machines and who doesn’t, even as Covid-19 patients flooded hospitals.

Rwanda, like most other African countries, only has a few of these life-saving machines, which are imported and cost anywhere from $25,000 and $50,000 apiece. It is against this backdrop that biomedical engineers at the Integrated Polytechnic Regional College Kigali (IPRC) resolved to make them. According to IPRC Kigali Principal Engineer Diogène Mulindahabi, the biomedical engineers partnered with doctors at some of the local hospitals to develop a prototype.

“Within eight days, the team developed a prototype called Rwanda Emergency Ventilator (REV001) using locally-available materials. The machine they made met the minimum requirements for a patient ventilator,” says Mulindahabi. The team of engineers also developed a second portable emergency ventilator prototype (REV002), which can be used in an ambulance.

“Since these are sensitive equipment to be used on the human body, we have to ensure they meet the required standards. We cannot afford to make mistakes. So the prototypes are going through a rigorous certification process,” says Mulindahabi. The team at IPRC Kigali knocked on several doors in search of funds and managed to receive $20,000, which will be used to finalize the second version of the prototype. The institution is however still open to receiving more support that would go a long way in the mass production of the ventilators. But what will the final product cost once it hits the market? Between $4,000 and $5,000. “The country will save millions of dollars and have a locally manufactured product that works just as well as the imported ones. We also hope to take this product to other countries in the region,” says Mulindahabi.

Rwanda is not the only African country to have manufactured its own ventilators. A team of students from Kenyatta University in Kenya also devised a ventilator machine that has met the standards of the International Organization for Standardization (ISO).

Ghana and Uganda have also joined their African counterparts in taking the lead to produce home-grown ventilators.