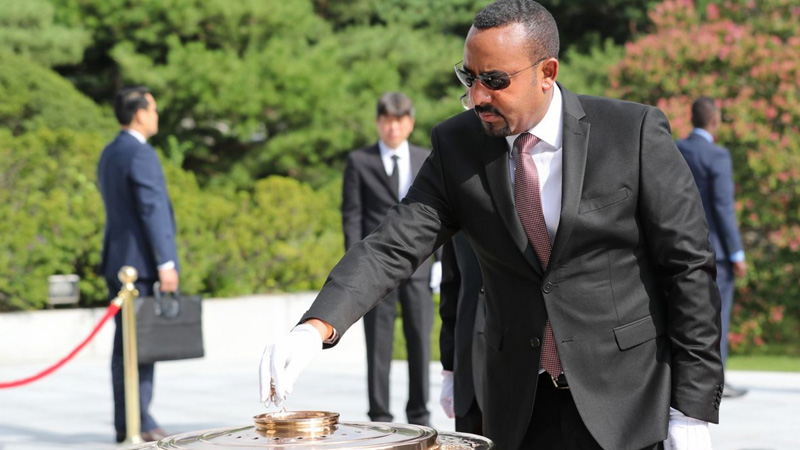 Ethiopia’s prime minister, Abiy Ahmed, was awarded the Nobel Peace Prize on Friday for his work toward ending a 20-year conflict with neighboring Eritrea and opening up one of Africa’s most notorious one-party systems.

Mr. Ahmed’s overhauls have put Ethiopia, Africa’s second-most-populous country and one of its fastest-growing economies, on a transition toward democracy, even as other countries on the continent have drifted deeper into authoritarianism.

Within months of coming to power in April last year, Mr. Ahmed lifted a state of emergency, freed thousands of political prisoners and signed a joint peace declaration with Eritrean President Isaias Afwerki —steps that would have been unimaginable under his predecessor. An embrace between the two leaders, whose countries had locked in a border standoff since the late 1990s, along with the reunification of families that had been separated for decades, made news around the world.

Mr. Ahmed, a 43-year-old former army officer, has framed these changes as part of a broader effort to build an economic dividend for his country’s 100 million citizens, many of whom still live in abject poverty.

“In Ethiopia, even if much work remains, Peace Laureate Abiy Ahmed has initiated important reforms that give many citizens hope for a better life and a brighter future,” the Norwegian Nobel Committee said. “As Prime Minister, Abiy Ahmed has sought to promote reconciliation, solidarity and social justice.”

Mr. Ahmed has challenged longstanding power structures in the strategically important country, which is both a target of large-scale Chinese investment and a key U.S. ally in the war on terror in neighboring Somalia. He acknowledged that its ruling EPDRF coalition—in power since overwhelming a communist junta in 1991—has been tainted by corruption. He has accused the country’s security apparatus of terrorizing its citizens.

But the changes Mr. Ahmed has instituted have also unleashed forces that had previously been suppressed. Peace talks with various armed groups haven’t reached a conclusion. Last year, Ethiopia had the highest number of people internally displaced by conflict in the world, with some 2.9 million forced to flee their homes due to violence, according to the Internal Displacement Monitoring Centre. Another 522,000 people followed in the first six months of 2019.

Mr. Ahmed himself has delivered many of his speeches behind bulletproof glass after surviving an assassination attempt last year. His government said in June that it had foiled an attempted coup that killed several senior officials, including its military chief.

And while the peace talks with Eritrea opened up a border that had become known as Africa’s Berlin Wall, relations between the two countries are far from settled. Key border areas are still disputed and Eritrea, which gained independence from Ethiopia in 1991, remains one of the world’s most isolated countries. Despite the peace deal, Eritreans are forced into lifelong conscription, required to serve in the military and civil service or face imprisonment and physical abuse.

“It is important to remember that all of these things are very much a work in progress,” said William Davison, senior Ethiopia analyst at Crisis Group. “Abiy and the people around him now have to build a new political settlement in Ethiopia that is needed for democratization to flourish.”

Like the overhauls he introduced, Mr. Ahmed’s selection as the leader of Ethiopia’s ruling coalition came as a surprise. He is the first of his ethnic group to head the coalition, catapulting the Oromo—the country’s largest, but the long-marginalized ethnic group—into the center of power and ending a cycle of antigovernment protests and brutal government crackdowns.

Of mixed parentage, with his mother a Christian and his father a Muslim, Mr. Ahmed went on to appoint a diverse cabinet. Half the ministers are women, including those responsible for defense and peace, while all of Ethiopia’s major ethnic and religious groups are represented.

“The important matter is whether [the prize] will help reignite Abiy mania and ensure that his legitimacy is high enough to negotiate the tricky path to elections next year,” said Jared Jeffery, analyst at NKC African Economics. “We think that he will be able to translate this international acclaim into further increasing his domestic popularity.”

It is the second year in a row that an African has won the Nobel Peace Prize. Last year, the committee honored Congolese gynecologist Denis Mukwege, who spent his career treating victims of sexual violence, alongside Yazidi political activist Nadia Murad.

In a call with the secretary of the Norwegian Nobel Committee, Mr. Ahmed suggested that the award could inspire other leaders on the continent to embrace reforms favoring peace and reconciliation. “It is a prize given to Africa, given to Ethiopia,” he said. “I can imagine how the rest of African leaders will take it positively to work on this budding process on our continent.”

The prize comes with a 9-million kronor, or $916,000, cash award. In all, 301 candidates were nominated for the peace prize this year, the fourth-highest number on record. The Nobel Committee doesn’t announce the nominees, and doesn’t make the deliberations for the awarding of the prize public for 50 years, and then only on a case-by-case basis. Swedish industrialist Alfred Nobel, the inventor of dynamite, established the prize in his will along with awards for chemistry, physics, physiology or medicine, and literature.