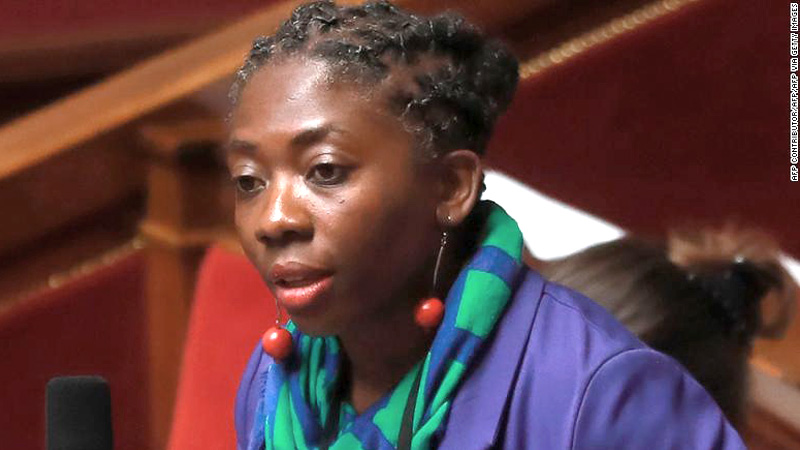 Danièle Obono, who is of French-Gabonese origin, said the article had “crossed a line” and was “an insult to my ancestors” and “an insult to the Republic.” (File photo)

(CNN) A French right-wing magazine has sparked outrage over an illustration published in its most recent issue depicting the Black politician Danièle Obono as an 18th century slave. The article in Valeurs Actuelles, entitled “Danièle Obono in the Age of Slavery,” is a fictional account of Obono’s return to 18th century Africa, prompting criticism from across the French political class. The story contains illustrations showing the left-wing member of the National Assembly with chains around her neck. Obono, who is of French-Gabonese origin, took to Twitter Friday to express her dismay at what she called “racist shit.” Obono remarked that “it appears that we can no longer say anything.”

Speaking to French TV station BFMTV, the magazine’s deputy editor Tugdual Denis said the magazine understood “the symbolic charge” of the image depicting Obono. Denis said he “personally” offered an apology to Obono, saying he regretted that “it could have been thought that we are racist.” Denis defended the aim of the story however, saying it sought to show the “destroyers of history” that an inter African slave trade existed in tandem with the European one. Obono also spoke to BFMTV Saturday evening saying the article had “crossed a line” and was “an insult to my ancestors” and “an insult to the Republic.” The politician said the image expressed “the reality” of the racism and stigmatization “that millions of our French citizens suffer from.”

During her BFMTV interview, Obono confirmed she had a received a message of support from President Emmanuel Macron. Prime Minister Jean Castex tweeted in support of Obono saying that he “shared the indignation of the deputy Daniele Obono.” Castex said the article warranted “unambiguous condemnation,” adding that the “fight against racism, always, transcends all of our divides.” This show of support was echoed by Minister for the Interior Gérald Darmanin who in a tweet offered support to Obono in “the name of the principles and values of the French republic that should rest more than ever at the heart of our political life.”

Criticism of Valeurs Actuelles also came from the chair of France’s lower house, the Assemblée Nationale, Richard Ferrand on Twitter who branded it a “deplorable representation of a parliamentarian.” Ferrand also spoke of the fight against racism, saying he offered “all my personal support and that of the Assemblée Nationale in facing this abjection.” Delegate Minister for Gender Equality, Diversity and Equal Opportunities, Élisabeth Moreno tweeted that while she did “not share the ideas of Ms Obono,” she offered her all her support. Moreno called on the magazine to apologize, adding that “racism was contrary to republican values.” French Minister for Justice Eric Dupond-Moretti on Twitter remarked that French law did not prevent this kind of publication, saying that “we are free to write a nauseating novel under the limits fixed by French law.” He continued “that we are also free to hate [the novel]”, saying he himself hated it and stood by Obono.

Valeurs Actuelles is a weekly current affairs magazine known for its right-wing stance. Leading figures from across the political spectrum, including Minister Delegate for Citizenship Marlene Schiappa, former Prime Minister Manuel Valls and even Macron, have been interviewed by the publication. An exclusive”tête-à-tête” with Macron in October 2019 focused on the themes of immigration and identity. A member of Obono’s own left-wing party, France Insoumise, Alexis Corbière, who has also been interviewed by the magazine, tweeted that the “attacks of a press crazy with hate against my colleague Danièle Obono are unbearable.” Valeurs Actuelles is not the only French magazine known for publishing controversial illustrations of French politicians. Minute, a smaller right-wing magazine, published a caricature of former French Minister for Justice Christine Taubira in 2013, sparking uproar. The illustration showed Taubira with the body of a monkey with the cover of the issue bearing the headline, “Taubira finds her banana.” After taking a case against the magazine, Taubira was awarded 10,000 euros in damages by the Court of Appeal in Paris in 2015 for “insult of racial character” according to CNN affiliate BFMTV.

During the course of her BFMTV interview, Obono confirmed that she was conferring with legal advisers on whether to make a complaint against the magazine. “I am considering it because despite it being presented in the form of fiction there are elements characteristic of public insult” she said. Obono added that she was committed to “defending notions of equality” and playing a part in the “fight against racism.” The leader of Obono’s political party France Insoumise, Jean-Luc Mélenchon was quick to decry in a tweet the “nauseating harassment” Obono has experienced at the hands of publications such as Valeurs Actuelles, Marianne and Charlie Hebdo. Satirical magazine Charlie Hebdo responded saying that by including their title in his tweet Mélenchon had “thrown the right wing journal, Marianne and Charlie Hebdo into the same racist basket.” Hebdo went on to say that despite Obono “always refusing to support us,” they could not help but voice their “disgust but not surprise regarding the villainous Valeurs Actuelles article and the racist representation made of Danièle Obono”

French political scientist and professor of French politics at University College London Philippe Marlière tweeted Saturday saying that France’s right wing is partly responsible for “this racist realignment of French politics under the cover of the defense of the values of the Republic.” During his interview with BFMTV, deputy editor Tugdual Denis said Valeurs Actuelles never “wants to shock” or “provoke.” Denis said that Valuers Actuelles as a magazine “goes where the others do not go,” handling delicate and often contentious topics. According to Denis, its readers are “frustrated” and “challenged by politicians in France.” Denis said the magazine’s readers “find in them: people who are able to write about delicate, distressing and difficult topics.”