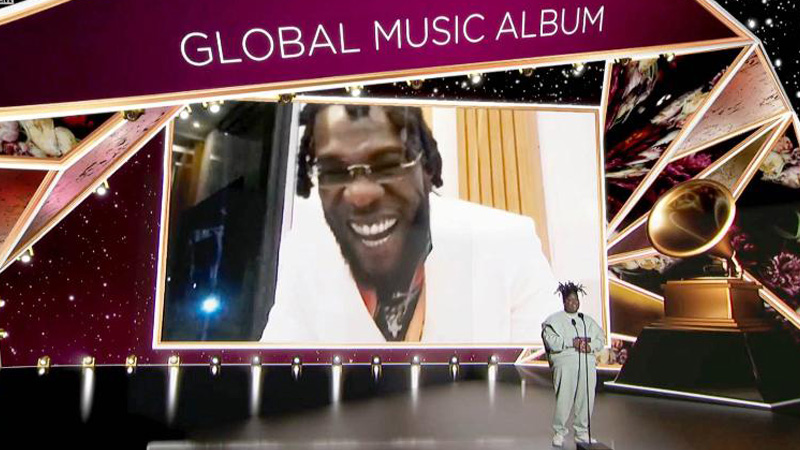 Burna Boy accepts the Best Global Music Album award for ‘Twice as Tall’ from Chika at the 63rd Annual GRAMMY Awards Premiere Ceremony.  It was second time lucky for Afrobeats star Burna Boy who landed a Grammy award for his album ‘Twice As Tall’ at the ceremony held on Sunday.

Burna, real name Damini Ogulu, missed out to veteran Beninese singer, Angelique Kidjo at the 2020 awards. As he accepted the Best Global Music Album award from his home in Lagos, Nigeria, Burna, 29, declared: “This is a big win for my generation of Africans all over the world.” “This should be a lesson to every African out there: No matter where you are, no matter what you plan to do, you can achieve it…,” he added. Another Nigerian winner was artist Wizkid, 30, who was recognized for his collaboration with US singer Beyonce on ‘Brown Skin Girl’ which won the Best Music Video at the 63rd Grammy Awards.

Beyoncé’s album “The Lion King: The Gift” — which she described as her “Love letter to Africa”– features collaborations with Afrobeats artists including Shatta Wale and Tiwa Savage. For music industry watchers such as Aibee Abidoye, these award wins signals that Afrobeats music “is here to stay.” Abidoye, a Nigerian music business executive, told CNN Monday that Burna Boy’s Grammy win is indeed a big win for Africa. “The Grammy is the biggest award globally that people recognize and most musicians look up to…with this win, African music — Afrobeats is here to stay as an acceptable genre of music,” said Abidoye, who is Executive Vice President at Nigerian record label Chocolate City. Afrobeats has struck a chord with youth around the globe. D’Banj’s hit “Oliver Twist” was one of the first to breakthrough when it reached number nine in the UK charts in 2012. Drake and WizKid’s “One Dance” topped the US Billboard Hot 100 chart for 10 consecutive weeks following its release in May 2016 and the UK announced the launch of Britain’s first-ever Afrobeats singles chart in 2020.