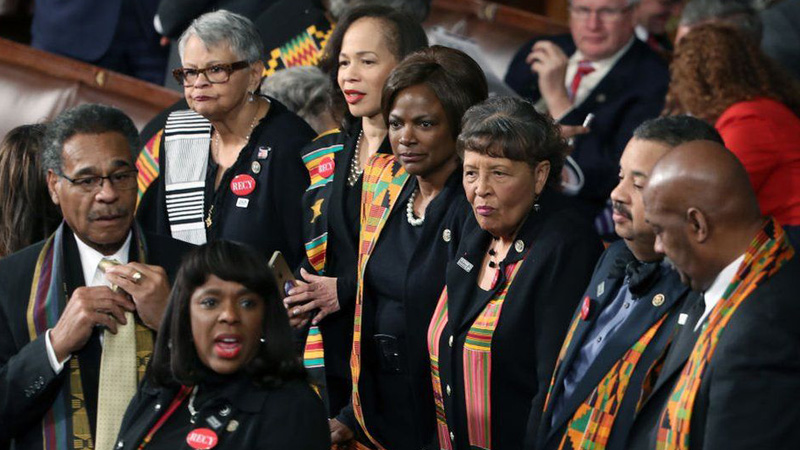 Ghanaian writer Elizabeth Ohene considers the global popularity of her country’s fabric in the wake of it appearing in a Louis Vuitton fashion show.

We in Ghana have absolute confidence in our fashion sense. We also happen to believe that the most beautiful and most dramatic fabric on this Earth is the kente, which is, of course, Ghanaian. The finely woven material has become the defining symbol of Ghana and Ghanaians and, indeed, of Africa, and for Black people in general. Time was when the kente was a strictly royal cloth reserved only for the most special of occasions and the elite of Ghanaian societies. Today the kente is widely available to all of us, but has retained its elegance and, when woven, is still expensive.

There are two main strands of kente in Ghana representing two ethnic groups – the Ashanti and the Ewe (among whom the cloth is in fact known as kete). I am convinced the Ewe version is the more beautiful one, but I would say that seeing that I am an Ewe myself. Originally, you could tell the difference between an Ashanti kente and the Ewe kete a mile off. The Ashanti designs tended to be exact and the colours unambiguous, whilst the Ewe kete designs were more subtle and the colours were less vibrant. But today after feeding off each other for years, there is not that much difference between the two.

Is it kente when it is a cheap cloth?

The kente is now far more than a fabric of adornment. It is political, it makes a statement and it remains a thing of beauty. Nevertheless, we cannot quite decide what our attitude should be about the kente becoming international. We love it and we are proud when a high-profile non-Ghanaian personality wears kente. But we are ambivalent about the cloth printed with kente designs being manufactured in China, which has enabled the growth in its popularity. Is it really kente if it is printed and not handwoven? Dare I say, is it kente when it is a cheap cloth? Should it be worn as everyday clothing rather than for a special occasion? We struggle with these questions but still watch with joy as the kente makes waves across the world.

Back in 2018, a group of lawmakers wanted to make a statement ahead of then-US President Donald Trump’s State of the Union address and draped kente strips over their suits. That was it; they did not need to carry placards. The kente strips spelt out the unambiguous message of support for African countries which had reportedly been described in derogatory terms the week before by Mr Trump.

Kente worn over a suit

During the recent Louis Vuitton show in Paris, kente was the headline item in the haute couture show. With Virgil Abloh as the artistic director of the top fashion house, it was not surprising that the kente found such a high-profile presence. Abloh is described as an American designer, but since he has Ghanaian I am not sure what the kente aficionados will make of kente worn over a suit, but it certainly turned heads at the fashion show.

In Ghana, the designs are mostly traditional but there are young, daring artists that are experimenting with new and unconventional looks and colours. Until recently, the most interesting kentes were worn by our traditional leaders. At a durbar, nothing quite prepares you for the riot of colours that adorn the gathering of chiefs all wearing kente.

The Asantehene, or king of Asante, seems to have an endless supply and the unstated rule is that once a particular design has been woven for him, his weavers would never repeat that design for anyone else. The kente retains its special status, no matter how old and is normally handed down the generations. It is not clear to me what one does with an old kente apart from hanging it in a museum; you could not really wear it to the shops nor to the office nor to a football match, no matter how old it is. It would be seen as a form of desecration of the fabric. Indeed, it appears the older the kente, the more valuable it is, or at least the more valued it is.