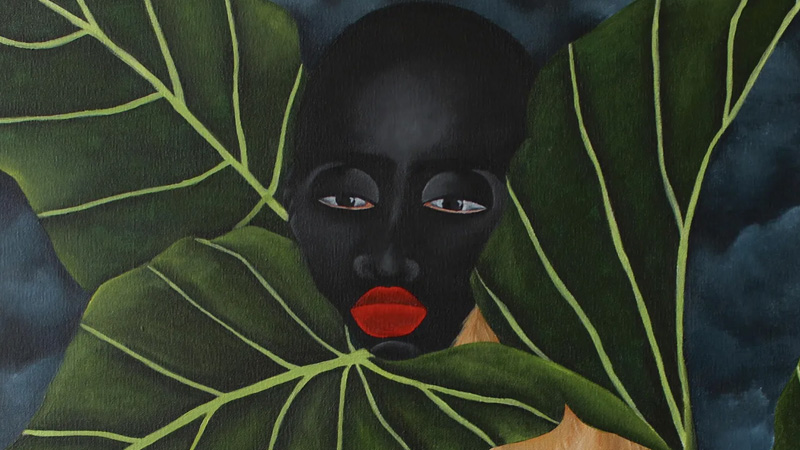 Sensuality Meets Acceptance in Zandile Tshabalala’s Self-Portraits. Get familiar with the provocative works of Soweto-born South African artist, Zandile Tshabalala. In our latest piece, we spotlight South African self-portrait artist Zandile Tshabalala. Her debut solo exhibition titled “Enter Paradise” is set to be showcased at the ADA \ contemporary art gallery in Accra, Ghana from February 25th to March 26th. The exhibition features acrylic paintings depicting sensuous Black women at one with their bodies and sexual nature.

When did your journey as an artist begin?

I’ve always been in touch with my creative side. I used to draw a lot of paper dolls when I was in primary school and I wanted to be a fashion designer. I got introduced to fine art in grade 10 when I took visual art classes and made the decision to study art further. My family and I were not in agreement with this decision so I would say that studying art was a way for me to rebel (we eventually came to terms as my passion and dedication were evident). Although I’ve always made art, it is only in 2019/2020 that my works began to be publicly recognized and that I began to be taken seriously as a practicing artist.

What kind of visual artist would you describe yourself as?

I’d describe myself as a figurative, self-portrait artist with a lot of imagination.

What would you say are the central messages/themes in your work?

Representation, rest, self-reflection, body positivity and dreamscapes are what I tackle most. As I continue painting and engaging with my curiosity, my work evolves.

Enter Paradise is your latest exhibition at ADA \ contemporary art gallery. Tell me what the inspiration behind that is.

The inspiration behind “Enter Paradise” comes from a series I did titled “Paradise” that is heavily influenced by the likes of Henri Rousseau. The term “paradise” itself has been central in my thinking and also in my living as I had to find and make a utopia out of the most mundane activities and spaces. Observing and reflecting led me to a different kind of paradise that is always present but often overlooked. It is the exhale and the moments of simple leisure that I was mostly interested in for this particular show. The Black female figure at the heart of this exhibition is visually quite distinct. Explain that a bit more.

The woman that is depicted is myself. I do not aim or aspire to depict an exact likeness, but rather a reflection that is more internal. My paintings are very reflective of the artist and sometimes there are clues in there as to how I think and who I am. I had the pleasure of having my first male muse also in the show (I’ll leave it to my audience to spot him).

Take a look at some of Tshabalala’s work below:

Stevie Wonder is moving to Ghana