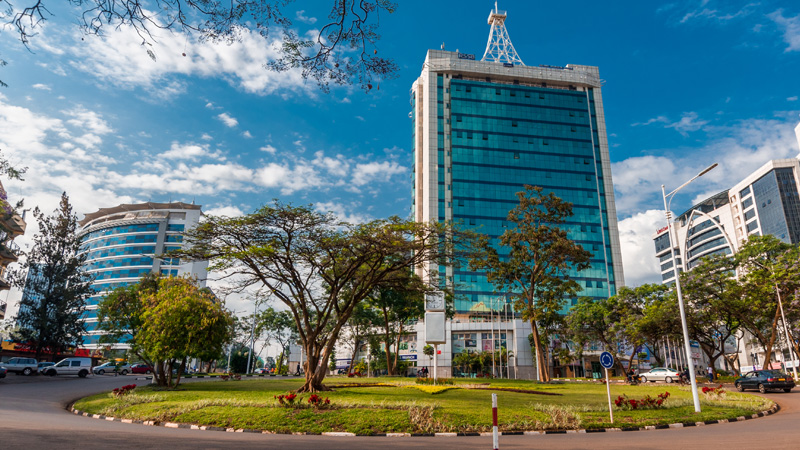 Kigali’s streets thrum with traffic, motorbikes darting around buses, its roadside markets a hive of activity. Standing on the roadside, it’s much like any other major city in the heart of Africa. But this is a city that stands apart from other metropolises on the continent. Today, Rwanda’s capital is synonymous with the surrounding green hills where mountain gorillas cling to life, while its streets have become famous throughout the world for being immaculate. But for so many, this city remains tied to the genocide, which saw between 800,000 and one million Rwandans murdered in a brutal tribal conflict in 1994.

Now though, through a combination of community service and entrepreneurial spirit, Kigali is moving forward, while never forgetting the lessons of its brutal past. Driving through Kigali, the cleanliness and the lack of trash has to be seen to be believed. There is not a speck of refuse, not a piece of paper, not a thrown away plastic bottle. While the local government pays some residents to tidy streets, on the last Saturday of every month each family must help clean up their community. This is known as Umuganda, which translates as “coming together in common purpose.” It’s an old Rwandan concept, which was officially revived in its current, compulsory form in 2009. There are penalties for those who don’t take part. The result is that the city is now one of the world’s tidiest major capitals.

Umuganda is part of a wider healing process going on across Rwanda. The government has also restored the tradition of Girinka, a welfare scheme in which vulnerable families are given their own cow. Meaning “may you have a cow,” Girinka has played a huge role in bringing society back together. Cows are held in high regard in Rwanda, a ticket out of and an assurance against the toughest forms of poverty. And when a cow has a calf, it’s expected that its owners will give the newborn to their neighbor. The idea is to foster community through traditional means.

“If you want to wish someone wealth, you give him a cow,” explains Edouard Bamporiki, a poet and Rwanda’s cultural minister. “And if I give a cow to you, it’s like we’re sealing our friendship. You can’t betray someone who gives you a cow.”

The importance of cows in Kigali is on show at the King’s Palace Museum, which is home to a herd of long horned Inyambo cattle. These cows hold regal status in Rwanda. They are serenaded and pampered, afforded the kind of luxury that today’s wealthy tourists would expect. “In our tradition, when we’re dancing, we raise our hands like the Inyambo’s horn,” says Bamporiki. For him and everyone at the King’s Palace, it’s clear just how much the Inyambo are revered and why cows play such a vital role in bringing people together. It’s not just traditions that are being used to help create a new Kigali. Mathias Kalisa is a young entrepreneur utilizing one of Rwanda’s greatest exports, coffee, to show just how this city has changed and developed over the past 25 years. He is typical of the younger generation here, who have created an energy and togetherness that can be felt on the streets. Kalisa owns Rubia Coffee Roasters, which has garnered a reputation for its delicious beans.

“Before 1994, you couldn’t see a young person like me doing business,” he says as he carefully pours out a cup. Despite the horrors of that time, Kalisa does not believe there is a chance of Kigali, and Rwanda at large, going back to that time.