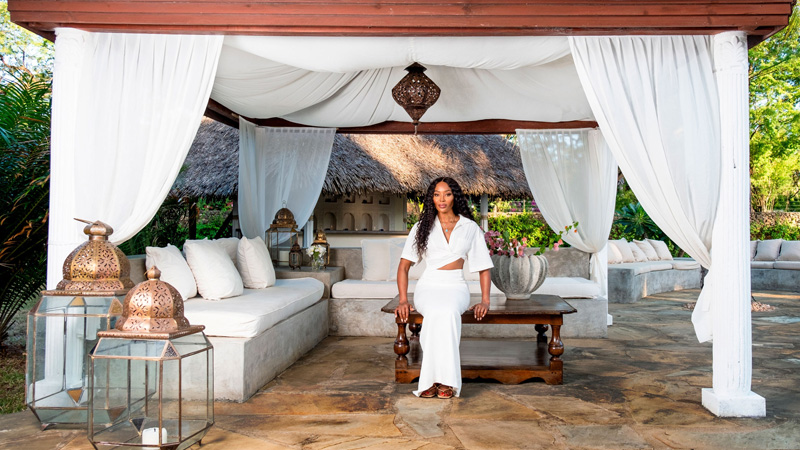 Whenever supermodel Naomi Campbell needs to unplug, she heads to her luxurious, airy villa in Malindi, Kenya. Over the course of her remarkable 35-year career, supermodel Naomi Campbell has blazed trails, stormed catwalks, and graced countless magazine covers. And while most of her legendary peers have long since retired and retreated from the spotlight, at 50 Campbell is as in demand as ever and enjoys a level of visibility models half her age would envy. She recently closed Fendi’s spring 2021 couture show at the Palais Brongniart in Paris, new artistic director of womenswear Kim Jones’s first for the venerable Roman fashion house. Images of Campbell slowly sauntering down the runway in a sublime silver cape and matching imperial gown set the internet ablaze and left little doubt that she remains one of the most significant models of all time.

In recent years, she’s become the face of Nars (her first beauty campaign ever) and appeared in Burberry and Saint Laurent advertisements, Beyoncé’s beloved “Brown Skin Girl” video, and Amazon’s fashion-competition series, Making the Cut. To the delight of millennials and Gen Z’ers, she’s also a constant presence on social media, regularly updating her more than 10 million Instagram followers (and nearly 500,000 YouTube subscribers) with archival images from her storied career, one-on-one chats with her famous friends for No Filter With Naomi, and videos from her far-flung travels.

Yes, her schedule is relentless, but work fuels her and continues to bring her joy. “First and foremost, never rest on your laurels, and I still like what I do,” Campbell says when asked about her refusal to slow down. “I use myself as a gateway, a connector to uplift and guide my culture on the right path and the direction that they need to be. This drives me.”

But even icons need rest. And when it’s time to fully unplug, Campbell decamps to her villa in the tranquil seaside town of Malindi, Kenya. Overlooking the Indian Ocean, her idyllic retreat is the epitome of indoor-outdoor living and for more than 20 years has served as her chosen haven from the breakneck pace of her native London and adopted New York City. Bathed in natural light and brimming with warm earth tones, the wide-open expanse is an ode to laid-back opulence. “It’s a very calming place,” she says. “You don’t really want to be on the phone. You’re not trying to find a television. You just want to read and be with yourself. It’s nice to just have the silence and the crickets.”